SETU organized a workshop for spreading awareness on the burning issue of child labour, especially in the craft sector of making lacquer products, at one of our partner artisan groups on 28th September in Jaipur (Rajasthan). This group is engaged in making lacquer products and makes beautiful artefacts & jewelry. The workshop was considered necessary for the artisans & their families to make them aware about the ill-effects of child labor, the existing legal framework on the issue and how it ruins a child’s life and deprives children of a safe and happy childhood that they deserve.

In the session, the prevalence of child labor in the lacquer industry was discussed and it was stressed not to engage children in making lacquer products. A survey conducted earlier revealed that even today many children are being employed as workers in the lacquer industry in general. Instead of sending their children to school, artisans engage them in doing the work so that they can help support the families. SETU strongly criticises any form of child labor and thus the artisans involved in making lacquer products with SETU are not allowed to take work from children. SETU strictly monitors the work practices of artisans associated with them. This workshop targeted the general artisan community on a larger level so that the artisans not associated with SETU could be addressed to help abolish the malpractice. 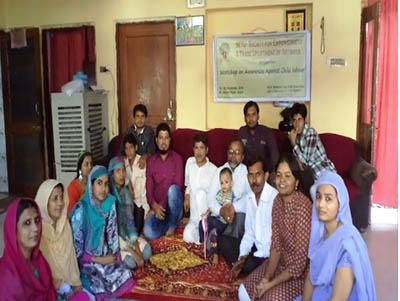 The workshop started with a general discussion on the topic of child labor, its presence in the lacquer industry, its effects and laws on the issue. The participant artisans presented their views and opposed child labor and said that they want their children to study and become good citizens on growing up. They too have ambitious dreams for them as any other parent. SETU team members applauded their opinions on the issue and said that children should be motivated to go to school, to enjoy their studies and should be made to understand the importance of school education because in today’s scenario, only education has the power to change the living standard. By receiving education, their children will become self-reliant and respectable citizens on growing up and will be able to carve a life of dignity and ease for themselves. About 15 artisan families participated in the workshop.