SETU had organized a two days program on the occasion of Universal Children Day / Child Rights Day. These were conducted on 18th & 20th November’09. Children’s Day is an event celebrated on various days in many places around the world. Universal Childrens Day is on November 20 (although other countries celebrate a local childrens day on other dates). On 20th November, United Nations General Assembly adopted the `Declaration of the Rights of the Child’ in 1959. The Convention on the Rights of the Child was then signed on the same day in 1989, which has since been ratified by 191 states. That is why this day is also well-known as “Child Rights’ Day”.

Education is essential to every child and every child has a right to it, is what SETU believes in. `Madhav Bal Niketan’, a local orphanage, also emphasizes on the importance of education, that is why they manage to send all their children to school and they were happy to be a part of our campaign of creating awareness for education. The orphan children in our program have faced many difficulties in their young lives. SETU initiated to offer them some support and encouragement they need to develop and grow.The basic aim of organizing the camp was to make children and their guardians aware of their right to education; make them realize that education is a way to achieve their dreams. 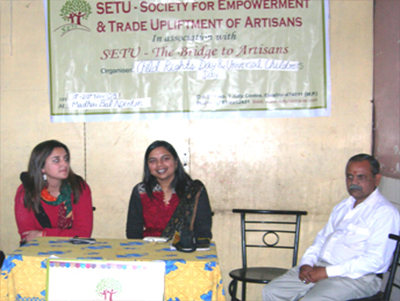 Following objectives were covered in the camp:

• To motivate children towards education.

• To develop Social interaction skills within them.

• To involve them in Fun activities.

• To spend time with the orphan kids and make them all feel special.

• To extend their exposure to outer world.

• To motivate them to enhance their imaginative power.

The orphanage houses 30 children including both girls and boys. Out of which only two are boys and the rest girls portraying the real picture of the Indian society. SETU Team including Society’s President Mrs. Rashmi Dhariwal and a special guest from Brazil, Ms.Mariana Oliviera, spent time with the orphan children on this day.

The sessions were designed more as a fun interaction and the concepts were delivered in playful ways for better understanding of children. In the beginning, children felt shy in opening up, they showed a kind of resistance in answering the questions about them and their likes & dislikes.

This was due to their limited exposure to social interaction. But with continued dialogue, they soon developed interest and started opening up. 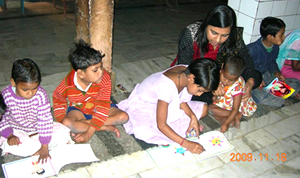 They were asked to think & depict “what they want to become in their life”, all of them actively participated in the theme and showed their beautiful and colorful dream worlds in response. In between the session, prizes were distributed for motivating them to increase their participation in the session, which of course results in the desired outcome. They were also asked the ways they would like to opt to achieve their dreams. The whole session made them think and set the goals for them and to perceive education as a basic necessity for achieving their goals. The aim to fill them with zeal was achieved to a great extent.

Chocolates and fruits were served in the breaks in-between sessions.

We had distributed Coloring books and other vocational books like mehandi design books along with water paints and wax crayons. Children were encouraged to draw & paint to unleash their imagination and have fun. All of them loved coloring the brand new books which were hardly accessible to them otherwise.