TED is a nonprofit organization devoted to Ideas worth Spreading. TED Conference invites the world’s leading thinkers and doers to speak for 18 minutes. It has many versions in India under the name of TEDx One such event was organized at Kakinada, Andhra Pradesh accompanied with the theme “awakening young India” in Jawaharlal Nehru Technological University, where Rashmi was invited as honorary speaker. To know more about TED visit www.tedxjntuk.com
SETU consortium team head Rashmi gave her presentation before 800+ engineering & management graduates of Jawaharlal Nehru Technological University, Kakinada (Andhra Pradesh) on 21st August 2010. People from various fields attended the event. Rashmi’s presentation on social entrepreneurship & Fair Trade concept was a huge success as many students seem to be taking interest in Fair Trade. 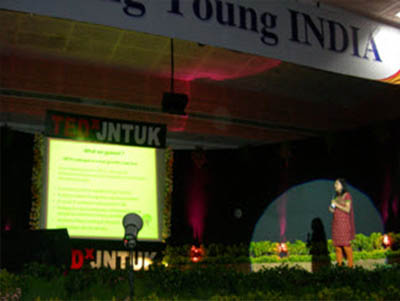 Businesses are not only about making profits, they are supposed to fulfill a much bigger role of giving back to the society. This was the point which Rashmi made in her presentation titled “Doing good is good business”. She said that youth are tomorrow’s future and they should not only be concerned about making profits but should also be aware of their social responsibilities; only then a society can be benefited in the long run. Young entrepreneurs should develop the attitude of taking up social ventures as opposed to purely commercial ones. This results in a win-win situation for the business as well as for the society.