Sponsoring Education for artisans and their children 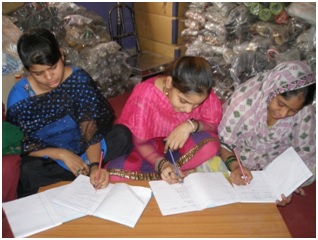 A lot of the jewelry making artisans associated with SETU are young girls who are either uneducated or are school drop outs. They live in the narrow streets of congested old Delhi and are mostly from poor Muslim families. Many had to leave school in between due to various constraints like lack of financial support, social taboos, lack of awareness etc. As they grow up and gain exposure, they realize the importance of education but now they feel shy of going back to school and studying along with children much younger than them. Also, some have to continue working to support their families and some are still not allowed to go to schools due to their conservative social backgrounds.

During one of the various interactive visits to the artisans, one of the daughters of an artisan shared her plight with SETU. Therefore, SETU decided to sponsor private evening classes for these girls for the next twelve months. All the uneducated women, school drop outs, or girls who cannot attend regular day classes would be able to study here, without compromising on their routine work. Also, the smaller children, who do go to regular school but lag behind in studies, can get extra guidance here for academic related problems.

At first, the families of these girls did not show much interest for the education of these girls. But after SETU team’s counseling, and seeing the desire to study among these girls, they accepted the option of evening tuition classes. SETU has sponsored fees for the education of around 21 girls, aged 12 to 22 years. The classes will run from April 2013 to March 2014.
SETU hopes that educating them will not only help in security of their own future but also of their next generations.