SETU is constantly working for the health of poor women in slum areas. We try to spread awareness on menstrual health and hygiene. We also distribute sanitary napkins packets to the needy women free of cost, so that they get used to the comfort and hygiene of using them and later on adopt them as an integral part of their daily lives.

After surveying almost 15 slums of Jaipur, the team selected Kathputli nagar slum for this campaign. As the name says it all, some of the families here make Kathputli (Puppet). Most of the people here do not have a regular source of income. The tourists’ footfall has reduced significantly, resulting in further drop in puppet sales. Their living conditions are extremely poor, with not a single household having washrooms and most of the residents being uneducated. Some women of the area work as part time house maids in the nearby societies. Some men are either trash scavengers or work as daily wage laborers. 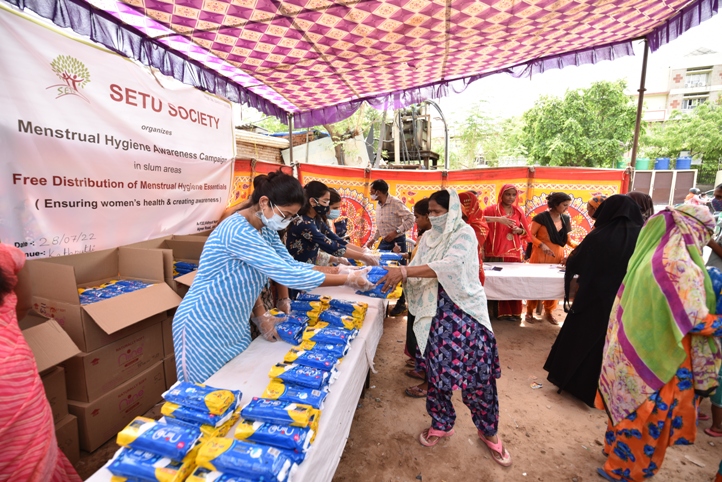 During our conversation with the women there, we got to know that many of them are suffering from lung diseases due to the synthetic material popularly being used in kathputli (puppet) making.

Such working conditions lead to unhealthy environment. Due to poor financial conditions and ignorance, they are unable to take proper treatment of their diseases. The Govt. has arranged temporary public washrooms for the residents of the slum in the common areas. Though this has helped, but the small kids and women still face a lot of difficulties, especially during the night. Even the use of public washrooms leads to many diseases amongst women.

Due to lack of money, most of the time these women don’t buy sanitary napkins, even though they know about it. SETU team interacted with a lot of women in the slum and collected information, at the same time making them aware about the importance of menstrual hygiene and their personal health. Our team requested them to use sanitary napkins, citing “health is wealth”.

Here, most of the kids don’t go to schools because of lack of awareness on the importance of education. The people here are unaware of most of the Govt. schemes and facilities. Most of the girls discontinue their schooling after 6th-7th grade to start helping their parents with work. They think that the most important thing is to feed their family and not education. Most men & youth waste their money on drugs and alcohol due to rampant addiction of these.

The team surveyed at least 15 slums of Jaipur but spent a whole of 7 days in this particular area. Finally, on 30th July 22, we organized a camp in the Kathpuli Nagar slum area. Local women volunteers were hired and a large drive was carried out for community mobilization and awareness in the slum. The camp began with great enthusiasm and a huge crowd gathered for the event, which boosted up the team morale. We successfully completed the free distribution of sanitary napkins. About 6200 packets (each containing 6 pads) were distributed among 1200 women and girls. We are hopeful that these women will henceforth prioritize their person health and maintain menstrual hygiene.

We hope to conduct more such campaigns in near future.