SETU regularly organizes workshops to spread awareness on issues of social concern and artisan’s welfare. In the series, workshop on eradication of child labour and protection of child rights was organised on the occasion of ‘World Day against Child Labour’. The programme was conducted for our jewelry making artisans at New Delhi. 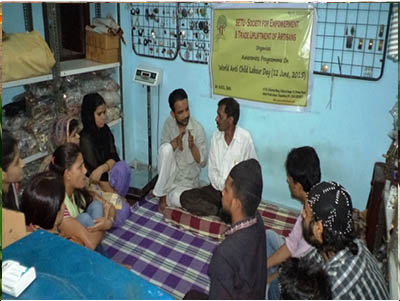 World Day against Child Labour is an International Labour Organization (ILO) sanctioned holiday that aims to raise awareness and activism to prevent child labour. It is held every year on June 12.

The basic objective behind conducting the awareness programme was to educate the artisans on the concept of child labour and the laws associated with it. SETU team stressed upon the fact that primary education is every child’s right and should not be compromised under any circumstances.

The artisans in SETU network are already aware that SETU supports Fair Trade principles and strongly condemns child labor. However, regular workshops act as a reminder and helps drive home the message that the brutal act of child labor needs eradication. This also helps in spreading the message to new artisans and to artisans not associated with SETU through word of mouth and artisan to artisan interaction.

SETU team presented facts that even in today’s changing times in many industries child labour is prevalent. The poor labourers, in the hope of earning more income, engage their children in doing work ; instead of sending the little angels to school. The children thus get deprived of their basic right to school education and start working from a tender age. This is a punshiable offence and is also despicable on humanitarian grounds. Child labour should be prohibited; it takes away the precious childhood from children and ruins their future which could be otherwise a bright one.